No home theater is complete without a great way to watch movies, games, and tv.

TVs are nice but if you really want that theater experience, then a high quality projector is the way to go. But choosing the best one can be difficult. All the specs can be hard to understand or even misleading. So when I wanted to choose a home theater projector for my basement, I did the research to find out what mattered and what were the best options depending on your budget.

If you want to skip the reviews and just check out the one I picked, I decided to go with the Optoma UHD60 4K. Or scroll down and check out all the reviews.

Here’s what I found. 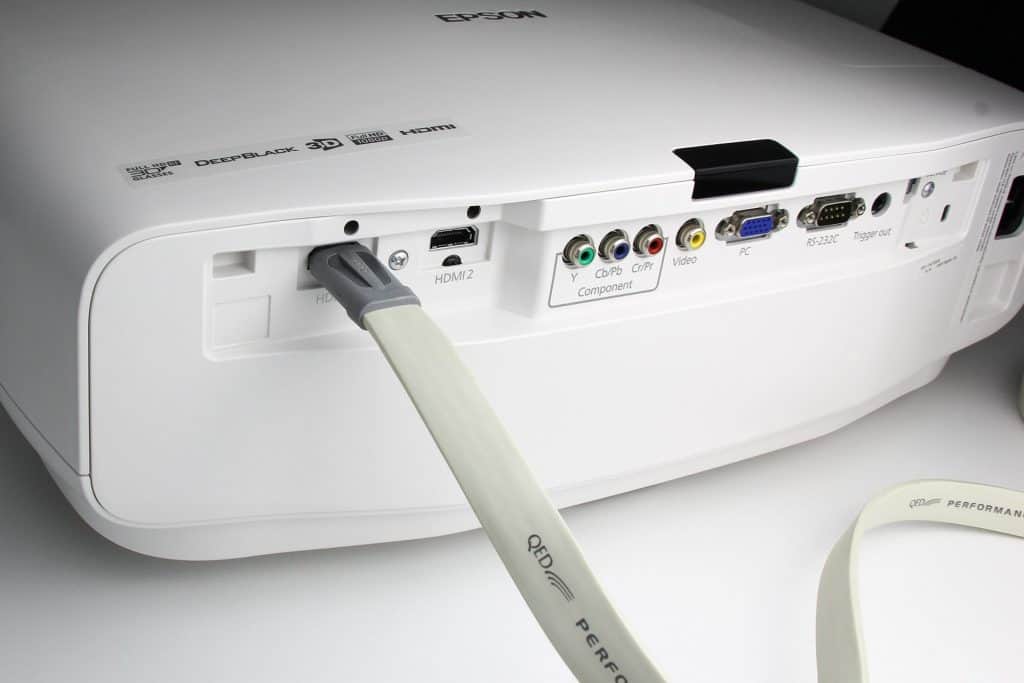 This is the best of the best. It’s not cheap but this is the projector you want if you don’t really have a budget and you want 4k HDR and incredible colors and image quality.

There are more expensive options, including some in this same Sony lineup, so check them out but they are just versions of this model with some added features. Most people won’t need any additional features but they are worth checking out.

This projector makes use of Sony’s SXRD (Silicon X-tal Reflective Display) projection display system. SXRD projectors offer much higher contrast ratios than LCD, DLP or even plasma displays. SXRD projectors use a 3-chip design. Each LCOS chip displays one of the primary colors (red, green and blue). Along with HDR technology, this delivers one of the best images in a consumer projector.

It can project images up to 300″ diagonally. To put that in perspective, that is a 25 foot diagonal! When it is dark enough, you can bring this thing outside and fill up a good portion of the side of a house!

The VPL-VW285ES is 3D compatible. 3D hasn’t really taken off in the home theater space the way it has in movie theaters, but with a large screen and a projector of this quality you can get pretty close to the movie theater 3D experience.

This model also has a motorized 2.06x zoom lens that makes it more flexible as to positioning in your room.  Sony also claims up to 6000 hours of viewing time with their 225W Ultra-High-Pressure Lamp.

Just about the only negative of this projector is the 1800 lumens brightness. If you have a room with windows or plan to do a lot of projector watching with the lights on (think super bowl party for example) then you will want to check out the Optoma model below which has 3000 lumens of brightness.

With most 4k HDR projectors costing north of $4000, the Optoma UHD60 really stands out as a huge value buy. This is the projector that I decided to get for my home theater after doing all the research.

With 4K resolution, HDR10 compatibility, and 3000 lumens, the Optoma UHD60 4k is hands down the best projector for the money.

This model is HDR10 compatible with a DCI-P3 wide color gamut and 1,000,000:1 contrast ratio. This means that the colors will be more realistic and the blacks on screen will be darker, which is always a concern with projectors. 1.6x zoom allows you some flexibility for positioning, though not as much as the Sony above.

Optoma achieves 4k UHD at this price point through some innovative technology. The UHD60 doesn’t have a full 4k array of DLP devices, but it flashes multiple times per frame creating a visual experience that is virtually indiscernible from native 4k. In addition, this approach for creating a 4k experience for the viewer has been certified by the Consumer Technology Association as being “real” 4k.

The HDR experience on this model is equally impressive for the price. It falls short of the best HDR Tvs out there but delivers better quality HDR than any projector at this price point. While it can’t handle the full color gamut of the most high quality sources currently available, it comes close. And it does so with subtly that many other projectors do not possess, preventing the watching experience from being unrealistic or jarring to the viewer.

Optoma claims 15,000 hours of life on the lamp. So you could watch Avengers Infinity War 5,625 times before it burns out.

If you like this model and want to save some money, check out the 2400 lumens version. The 2400 lumens is plenty of brightness for a darker room and you can save a few hundred dollars. However, if you have a lot of windows in the room or plan to watch with the lights on, then you may want the 3000 lumens version.

At this price point you won’t find any quality 4k projectors. However, when you are viewing on a large screen, you probably aren’t sitting that close anyway, so make sure you factor that in. It might save you some money.

The BenQ HT2050 is a great projector in this price range. Despite it’s lack of 4k, it delivers a solid image, good color reproduction, and enough brightness for most home theater rooms.

Despite this projector not being 4k, it does have an incredibly sharp HD image. BenQ is a well known brand in projectors and this model lives up to the reputation. If you don’t need 4k, it is a great choice in this price range.

It does make use of a single chip DLP chip, which can often show some artifacting. However, the BenQ HT2050 does a better job controlling that than most. In fact, if you are not looking for it, you’ll likely never see it.

This model does have 3D capabilities. Like most projectors, you lose a little bit of the iamge quality when you switch over to 3D but that’s not a deal breaker.

One interesting feature of this model is the built in 10W speaker. This may not be a huge concern for those with a dedicated home theater audio system but if you are building up your home theater gear slowly, this will let you get by without a separate audio solution. It’s certainly not ideal but a good temporary solution. Especially in a small room.

On the subject of small rooms, this projector can throw a 100″ image from only 8.4 feet. That means you could potentially set this up on a coffee table in front of the couch and still have enough space to view pretty large.

If you are dealing with a really small space then check out the BenQ HT2150ST which is basically the short throw alternative to this model.

Here is where things start to get a little tough. Finding a quality home theater projector under $500 is very difficult. You have to give up a lot. Most models in this price range are more suited for business presentations than home theater viewing. The good thing about a projector though, is that most people will be sitting far enough away that they may not notice that its not HD.

Full disclosure, this is really a business presentation projector. It’s not HD. It probably will not look as good as your HD TV. But it can give you a large screen image and it’s plenty bright for viewing with the lights on.

If you want something to project the game on a large screen during a party or to have the occasional movie night outside, then then might be a good low cost option for you.

It doesn’t really hold up as a dedicated home theater projector though. You would be better off saving for a little longer and getting the BenQ 2050 above.

What To Look For

So how did I decide to go with the Optoma UHD60?

There were a lot of factors that you should consider when choosing a projector. Here are some of the most important ones.

Home projector brightness might be the most important factor for you to consider, especially if you’re incorporating your home theater into a multi-function room such as a home bar or game room.

You need to ensure that the projector is bright enough to be viewed in the environment in which it is located. even the sharpest picture isn’t worth much if your guests can’t see it.

Projector brightness is measured in lumens. Generally, quality home theater projectors range from a thousand lumens up to 2,500 and beyond.

If you’re trying to build a dedicated home theater with controlled lighting then a thousand lumens should be enough. Rooms with some ambient light such as a basement set up can work with as low as 1500 lumens. spaces with Windows or other significant light sources need about 3000 or more lumens to be comfortably viewed.

is a good idea if you are building your home theater space in a basement to invest in some blackout shades for any windows. They cost a lot less than an extra bright projector.

Nowadays, I wouldn’t settle for anything less than a full HD (1920 x 1080) projector. But really, 4K is where we are headed. I think most TVs will be 4K in the next few years. Even though the tech is already out there for 5K and beyond, you’ll be safe at 4K for a while. There is only so much resolution our eyes can discern.

An important factor that many people forget when choosing resolution is viewing distance. If you anticipate your guests sitting closer to the screen then 4K maybe worth the investment. however if you have a large room and your guests are sitting further away then standard HD would be acceptable and in many cases from a further viewing distance 4K and HD may appear the same.

A less important factor to consider is the projectors contrast ratio. Contrast ratio refers to the difference between the blackest black and the whitest white in an image.

However, be careful about selecting a projector simply based on a extremely high contrast ratio. The contrast ratio does not account for the projectors ability to show variations and shades of grey in between black and white.

It is a good idea to check reviews on a projectors ability to display gradations in both black and white and color before making a purchase.

Mounting your projector is an important consideration when planning out your home theater.

You have to decide if you want to implement a ceiling mount, have the projector sitting on a table, or invest more money in a short throw projector that usually is located at the base of the screen much closer than a normal projector.

I would recommend against a table top projector as you will constantly have people walking in front of it when you have guests over.

Short throw projectors generally cost significantly more than standard projectors but if you have a small space and cannot mount a projector on your ceiling it may be worth the investment.

Choosing a home theater projector is no small task. There are a lot of things to factor in your decision. I hope I’ve made that decision a little easier.

If there is anything you think I may have missed or should add to the evaluation, please leave a comment below and let me know.