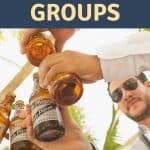 Need to find the best drinking games for small groups?

Not every party has to mean a full house and a line at the beer pong table.

Try these games for your next small party.

Only two of you, check out these drinking games for 2 that don’t require cards or dice.

All you need for this one is a small glass or two and some quarters.

The size of the glass can vary depending on how difficult you want the game to be and the skill level of the players. A small rocks glass works great but you can try it with a pint glass or even shot glasses. Each have their own unique challenges.

Fill the glass with your drink of choice (typically beer) and put the glass in the middle of the table and the players take turns trying to bounce the quarter into the glass.

If a player gets one in then they choose a person at the table that has to drink.

If a player gets three in a row in, they get to make a rule for the game. These can be your typical drinking game rules like:

Chance – A player that misses a shot can call chance immediately after the miss. This means they can try another attempt, but if they miss, they have to drink.

Challenge – If a shooter hits the rim of the glass but doesn’t make it in, the other players can challenge him or her. If the shooter misses the challenge shot then they have to take a drink, but if they make it then every challenger has to take a drink.

For this one you need a deck of cards and a glass or empty can of beer.

Everyone also needs their own beer, but you should know that.

Place the glass or can in the middle of the table and then shuffle the cards and spread them in a circle around the drink.

Each player takes one card and has to complete an action based on the card they draw (see below). After their turn is completed they have to put the card on top of the can or glass in the middle. You can also play without the middle can but that adds an extra element because any player that knocks all the cards off the center can has to finish their beer (and go get a new one of course). 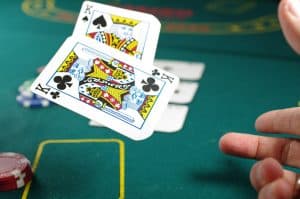 Here’s what the cards mean:

Two through Five
The player that picks the card drinks the number of drinks equal to the card value.

Six through Eight
The player gives out the number of drinks to anyone else playing. They can divide it up between multiple players.
Nine
Rhyme (also know as “bust a rhyme” or “rhyme time”) – The player says any single word. Everyone else then must go in order saying words that rhyme with that first word. This continues until a player can’t think of a rhyming word within a couple seconds…so they must take a drink.
Ten
Rule – If you draw a ten, you have to start a category. All the players must list items that fit into the chosen category. You can make the categories simple like “types of cars” or complicated like “movies that have to do with time travel.” If you want to really make it interesting, a category can be “people you’ve
Jack
Gestures – If you draw a jack, you are now the Gesture Master. That player creates a simple gesture. Anytime they make that gesture, all the other players must mimic the gesture. The last player to mimic the gesture must drink. That player remains the Gesture Master until another player pulls a Jack.
Queen
Question – The player that draws a Queen immediately turns to any player and asks them a question. That player then must ask any other player a different question. The first player to either answer the question or fail to come up with a new question to ask someone else must drink. You can’t ask a question back to the person that asked you.
King
Categories – The player pulling a ten creates a rule that all players must follow for the remainder of the game. Any player who breaks the rule must drink. Popular ones include not being able to use other players’ first names or words that come up often in the game like “drink”, “beer”, or “card”
Ace
Waterfall – The player who has drawn an ace starts a Waterfall. The direction of the Waterfall is chosen by the player who drew the ace, then all players start drinking at the same time. The player who drew the ace is the first to stop drinking. When he or she stops, the first player in the direction of the Waterfall is allowed to stop drinking. When that player stops, the player sitting next to them is allowed to stop, and so on until all players have stopped drinking. You don’t want to be at the end of the line…or maybe you do.

Want to keep it simple and do some shots?

This Shot Spinning Roulette game might be perfect for your small gathering.

If you ever played roulette before then you can learn this one quick. In fact, even if you never heard of roulette (who hasn’t?) then the concept of a wheel spinning and landing on a number is pretty simple. To enhance this game, make a board with all the numbers and colors on it and let people bet on a number. If they win then they choose who takes the shot. Or just make up your own rules…either way it’s simple and get’s the drinking going fast!

Now we are getting into some of the more obscure games. This is one of the best drinking games for small groups that know each other well (or that don’t know each other at all and want to break the ice).

Sit in a circle (or whatever shape you want…this isn’t geometry class). The first person has to ask a question about who in the group would be “most likely” to do something. For example, “Who would be most likely to pass out.” or “Who is most likely to end up in their underwear at this party.” You can be as funny (or as inappropriate as you want).

Once the question is posed, someone counts to three. On the count of three, everyone points to the person they think the description fits.

For every person pointing at you, you have to take one drink.

This is a card game needing an even number of players.

Deal each player a card face down, that’s turned over with everyone else’s on the count of three.

If your card is the same number as another player’s, point to that person as fast as possible and shout “clown.” The last player to say it has to drink for as many seconds as the value of the card (face cards are 10 seconds and an ace is 15 seconds).

If a player points to another but there is no match, they drink two drinks.

This one is as easy as it gets.

So it’s perfect for a drinking game to play a little later into the party!

After shuffling, deal a single card to the first person. This person has to guess if it’s high or low.

If they guess correctly, deal them another card and repeat the process. If they guess three right, they can continue guessing or pass.

But if they guess a card wrong, they drink to the value of that card (in seconds). For Jacks, Queens and Kings, the value is 10; Aces are 11.

Take a deck of playing cards and balance them on top of an empty bottle face down.

If you get really good, you can try to blow off more than one card to make it more difficult for the next person.

As a bonus: anyone who blows off an Ace also drinks a whole beer. Two Aces blown? That’s two beers, etc.

8. Never Have I Ever

Want to break the ice with a group of friends that doesn’t know each other well?

Never have I ever is a drinking/confession game that can really get some excitement going OR could totally embarrass one or more people.  Either way…tons of fun!

The rules are simple, the first person to go says something they have never done. For example, “Never have I ever streaked across a football field.” If anyone in the group HAS done that thing, they need to take a drink. If no one drinks then the person that made the “Never have I ever…” statement has to take a drink. This encourages them to pick things they know at least one other person has done.

The fun part is when there are some interesting things that maybe only one or two other people know about you. You could choose to lie about it and not drink. But if you get called out on your deception, then you have to finish your whole drink and tell the story (or the person that called you out on it can tell the story).

But do you really want to call out someone if you know they’re lying? You have to be careful because you may want them to keep a secret for you eventually!

So there you have it, what I think are the best drinking games for small groups.

And if you are looking for a great way to always have fresh new bottles of some of the best alcohol around check out this cool new subscription service.

If you have one that you want to add, please leave it in the comments (with the rules).

I’ll definitely add the good ones to the list.