How Long Does Beer Last In A Keg?

Try as you might, sometimes you can’t finish a keg quickly. But how long does beer last in a keg? It depends on the method of storage, the kind of beer, the style of tapper, the temperature of the storage area, and a few other key factors. Read on to find the answers to some common questions related to how long beer lasts in a keg.

How Long Does Beer Last In A Kegerator

The kegerator — a small fridge devoted to cooling, storage, and distributing draft beer — is the most common way to have a keg in your home. Though you can probably throw them back, you’re probably not pouring as many pints as a bar or restaurant would. So, how long can you expect beer to last in a kegerator once it is tapped?

It is a tough question to answer because it will depend on the kind of beer and the beer’s brew date. Generally speaking though, beer will last chilled in a kegerator for six to eight weeks once it has been tapped.

Keep reading to learn about how the way a keg is tapped and how it has been stored affects its shelf life. Learn some tips on what the best storage and tapping method is if you want to extend the shelf life of your keg of beer.

How Long Does Beer Last In A Keg Untapped

If no oxygen is introduced to the keg and it is kept cold, you can find that beer in a keg will last a long time untapped. It depends on the type of beer and how it was made.

Pasteurization makes a difference to the shelf life of an untapped beer too. Pasteurized beer will last at least a few months, sometimes up to six months. Unpasteurized beer will only last closer to two months. Anecdotally, many beer enthusiasts will say they have consumed beer after six months — but it is not necessarily recommended. Keeping the beer cold extends the shelf life and ensures the beer’s flavor is retained.

Another thing to consider is whether you are force carbonating the keg before or after you store it. A keg that has not been carbonated will last much longer than one that has been force carbonated before storage. 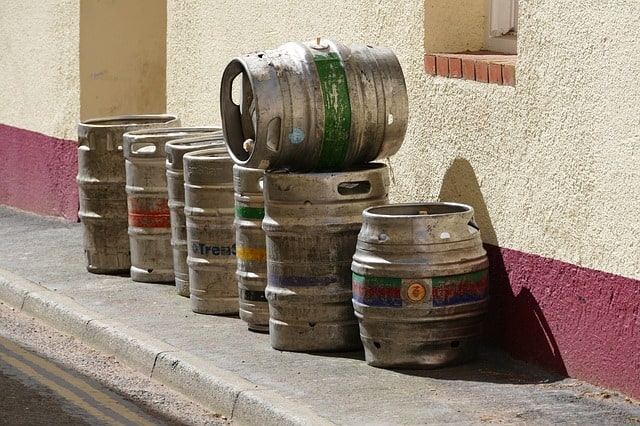 How Long Does A Keg Last Unrefrigerated

Generally speaking, you can store a sealed keg at room temperature and it will not affect its shelf life much. An ideal temp would be more 44 to 55 degree Fahrenheit — but most room temperatures will do. Avoid storing in high heat or below freezing temps.

Stored at room temperature, you can expect your keg to last several months. Some brewers even say indefinitely as long as the seal on the keg remains. Ultimately, it is ok to store a keg of beer unrefrigerated, but many experts will say that its beer to keep beer at a steady, cooler temperature.

The ideal temperature to store a keg of beer is 38 degree Fahrenheit. Not only does this keep the beer refreshingly cold — without freezing — it affects other parts of the beer’s flavor.

The flavor in a beer can be negatively affected if it changes temperature too drastically or too many times. That’s why its preferred to keep the beer at serving temperature during its storage and active use.

Additionally, a cooler temperature reduces the foaming of the beer in forced CO2. The cooler temp allows for better gas absorption into the beer, meaning a smoother carbonation process and less foam.

How you tap a keg greatly affects how long the beer will stay fresh within the keg. In this world, there are two types of keg pumps. The first is a manual pump which is often referred to as a “party pump.” These are the hand pumps you might remember from college parties. The second in the CO2 pump which utilized pressurized C02 from a cylinder.

If you utilize a manual pump to tap a keg, the beer will not remain as fresh because the hand pump introduces air (with oxygen being the worst culprit) into the keg. If the beer becomes exposed to oxygen and oxidizes, you can only expect the beer to last for a few days before losing carbonation or flavor.

The CO2 pump is what is commonly referred to at the “tap” at a bar or restaurant. This is the type of pump that most kegerators use to distribute beer. With the pressurized CO2 canister, little to no air reaches the beer until it is pushed through the tap. Because the beer isn’t exposed to oxygen, the beer in a keg tapped with a C02 pump can retain its freshness for weeks.

If you love beer but don’t drink enough to warrant a keg, check out our list of the best mini-fridges for beer.

What are your thoughts? Tell us what your experiences are in the comments and if you have seen different results than the ones above.